Photo is from Windows 8 Shortcuts by FirstLook: A free app that I downloaded from the Windows Store several months ago launched via the Start Screen in Windows 8. Searched for keyboard shortcuts and there it was. Screenshot (above) courtesy of the Start key + S key combo that you get with OneNote 2013 desktop (paid) version. There is also a OneNote 2013 modern (free) app available in the Windows Store. However, the keyboard shortcut (Start+S) is installed by the paid version is, unfortunately, not there in the free one. Gotcha!

The Start Screen in Windows 8, in my opinion, is the major gotcha in Windows 8. What do I mean by gotcha? An unforeseen obstacle. For who? For anyone who buys or sees it. Why? Some folks may not need all the bells and whistles and at this point may not view it as a wise investment. For me, yes, it’s a wise investment. But I’m blogging about this stuff and I need to keep my Dell T7400 running in tip top shape to be able to run the max amount of apps and get more done, be more productive. So for me it has been a wise investment. But if you’re interested, the Surface RT and Surface Pro are the prototypes Microsoft has built to inspire other OEMs to create their own RT (ARM) or Pro (Intel/AMD) device. If you haven’t tried it yet, there’s probably one at Best Buy or Staples if you live near one if you are truly interested in Windows on a touch. Then compare against a desktop (non-touch) device in the same store if possible.

Why am I talking about accelerator keys and QAT then? Accelerator keys are just keyboard shortcuts that you can either program or configure on your operating system, or even into Word. Macro shortcut keys are a good example. The Quick Access Toolbar that was introduced with Office 2007’s Fluent UI (User Interface), or the Ribbon.

Photo of the “Start” screen my Dell Precision Workstation T7400 running Windows 8 Professional 64-bit. Took it by pressing Start+S and pasting into Live Writer by placing my insertion point (cursor) above this paragraph, in a paragraph with nothing typed in it yet, and simply pressed Ctrl+V.

So how could it be viewed and rationalized by information workers (power users) that it may not be a wise for others then? They’re not “all in” on the Microsoft vision for the cloud. It’s probably they don’t own a portable device. Whether it be a tablet or a smartphone. They may just not need one. Either they don’t need to be portable or they’ve defacto committed to iPhone or Droid via wireless contract. Bleeding edge consumers who like their gadgets may just be committed to Apple and Google altogether, they’re lifelong users and that’s just that. Apple users, who are by choice Apple consumers, who a required by their job to use Windows 8 may have interesting opinions on this topic. But I digress, for now.

Let’s look at the scenario I found myself in when I installed Windows 8 RTM* (no service pack, yet, obviously) on my home computer back about last October (2012). Before that I had tested the beta but only for work. Not regularly, in a non-controlled environment and outside the think-tank (workplace) to play freely.

I had the following scenario:

When I installed Windows 8 on my home computer that was the first time I had tested it on a physical machine. Before that it was in virtual machine environments. I knew about the Start screen. But what I really cared about was if the Start “key” on the keyboard would work. In the Hyper-V manager connection it didn’t. So I checked and found the on-screen keyboard which you can get by hitting Start menu, move cursor to far lower right corner of the screen, then move up to hit Start. You can also do that from the top right corner or the lower left to get your old Start+Tab screen (live thumbnail preview of cycling through programs via Alt+Tab.

“Where’s that Tab I ordered…”

Here’s what I have today:

From my experience on this configuration, here’s my final synopsis, or review if you will, on Windows 8:

Good for anyone interested in getting a touch device. Whether it be a tablet or desktop. They make those now you know.

Bad for non-touch, desktops users who want to get things done and IT helpdesk staff.

Ugly for those implementing, migrating, upgrading, evangelizing. The only good scenarios I foresee is if you have folks from the first two either in your social network or colleagues at work.

I guess I’m stuck in the final quadrant. But, for me, I see lots of software come and go and don’t blame the companies as much anymore that make it. But with that said, the end-users ultimately rule the roost and have a strong influence on how and why I write content such as this article.

Bottom line, don’t fee pressured to move to Windows 8 just yet if you haven’t already. If you’re comfortable staying there, especially if you’re purchasing the licenses for your org, and you’re on Windows 7, then you’ve staved off upgrades for another year. But with a warning, be sure to get it in your budget for next year or look at Windows codename Blue. Yep, they’re already going there.

But what about search? When I click on the Start button I want to be able to search there! Start + Q. However, this will be a problem for those intermingling, or co-existing in the workplace using different versions of Windows. My answer for Windows 8 users talking to Windows 7 users: Start key. Or, let’s say, if you yourself have Windows 7 at home but Windows 8 at work or vice versa. Or worse, Vista!!! Same steps, same ultimate result. Just a different search experience once you get past that point. But I digress, again. Windows 7 users will likely still want to use their mouse and click the Start button. Understandable. The old option for searching on Windows XP was Ctrl+F. Don’t get me started on those Fn keys! (laptops)

Quick Access Toolbar (QAT) in Windows Live Writer 2012. Notice that I’ve customized mine a bit, adding the from your computer command that you get here:

Inserting a photo from computer. Also possible if you copied to clipboard using Ctrl+V, provided you actually copied a photo by selecting it and pressing Ctrl+C.

Probably the best command in Live Writer would be Post draft to blog, just right-click it on the Ribbon if you have Live Writer 2012.

And there you go, it’s now on the QAT. Brilliant!

Takes some time getting used to though. I still find myself going down the same path of clicking the Insert tab.

But why do I say “a lost art” in the title then when commenting on shortcuts, accelerators, and QAT? Because art is activity. Thus, if you are in the activity of being productive (working in an office) and are an information worker, then work is kind of your art. So keyboard shortcuts, in my opinion, can be a great way to maximize your productivity even though you may not agree, like, care, or ever want to even look at another Windows 8 or Vista box. All the new bells and whistles, sometimes, cover the forest behind the trees: Getting things done faster in less time with less clicks.

And finally, a word on pinning. On my desktop non-touch Dell T7400 device at home, I hardly use the Start Screen as much as I used to, unless I’m testing a new Windows app or something related to the new Modern UI. So what I do is pin items to my Taskbar and Start menu, any chance I find one that I need via Start+Q. To me it’s all about real-estate. How much you can fit into that strip on the desktop.

As far as the Surface, I’m only using that when I’m on the road which hasn’t been much lately. I’ll need to blog from that this upcoming weekend. Provided I can get Live Writer on there.

One tip for those interested in purchasing a Surface. Ask for devices with ARM chips running Windows RT and compare pricing to Intel/AMD devices. Do a comparison of Windows RT to Pro features. You’ll want to get to know those gotchas for down the road.

RTM stands for Release to Manufacturing

ISV stands for Independent Software Vendor (Microsoft, Google, Yahoo!). They focus more on the software (OS/apps) side of things.

Got prompted for the new Windows Phone 8 update on my HTC 8x about half an hour ago and figured I’d blog about it since I haven’t gotten many screenshots from both my phone’s built-in screenshot abilities (Start+Camera button) and taken from another external camera from outside the phone of the physical screen, since [I don’t think] I can’t take screenshots while it’s booting up.

I tapped Install on the screen above to kick off the update. It (the phone) said goodbye to me (powered off) and rebooted automatically to the sight of two gears dancing (animated) in sync with each other.

Tapped install (in above pic) and got the gears…

The gears are supposed to be telling me it’s updating (patching) and changing stuff??? Educated guess. Gears run for about 5 min, until it…. 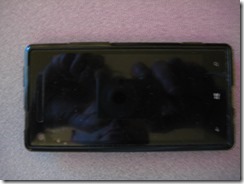 Canon PowerShot SD1000 in the reflection…

Here we are booting up… 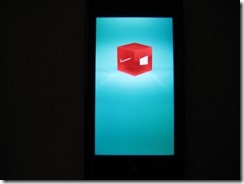 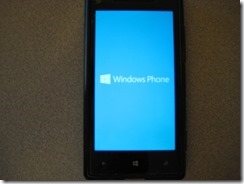 Forgive the linear cavalcade of pics, I should organize them into a table if it permits. Use the mouse scroll wheel if you have one to navigate downward… 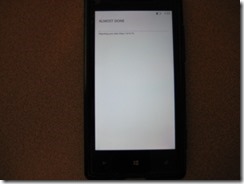 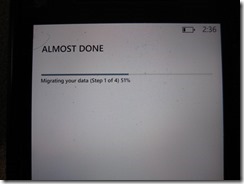 Took a break, came back in five minutes…

Your update is all done!

Tapped done which brought me to Start screen on the phone.

Swiped left and typed s for Settings and tapped it.